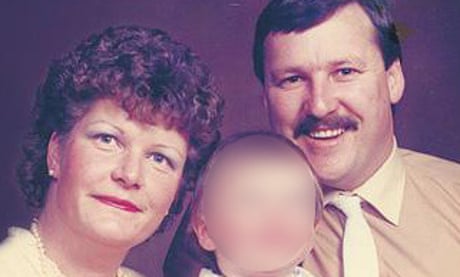 Council workers Michael and Lesley Taylor were under coronavirus lockdown with their son, 34-year-old Myles William Taylor, when police allege he bludgeoned them to death with a hammer in April 2020.

The couple were 65 and 64 and approaching retirement when police say Taylor attacked his father before turning on his mother as she tried to escape through the front door.

Michael’s sister Shelley Taylor-Smith says the couple were “devoted to each other and the love for their family”.

Guardian analysis shows at least 11 people over the age of 55 died in Australia last year in cases where a younger relative or spouse has been charged with their murder.

Myles Taylor has been charged with the murders of his parents and remains in a secure psychiatric facility. He has indicated he will plead not guilty on the grounds of insanity.

The increase in serious cases of alleged physical elder abuse over the past year has been “confronting”, says Dr Meghan O’Brien, head of social work at Peninsula Health in Victoria.

Since the start of the pandemic, more older clients have been brought to hospitals in her area with “physical assaults and strangulations”, she says, and alleged elder abuse cases at the health service have risen by 59%.

Seniors rights organisations in Victoria, NSW, Tasmania, ACT and the Northern Territory have all reported increased requests for help in 2020, with financial and psychological abuse the most common reports. Organisations in other states say they are bracing for more requests in 2021 as family and friends become aware of hidden elder abuse.

“With Covid, the risk factors [for elder abuse] have intensified,” says the NSW ageing and disability commissioner, Robert Fitzgerald.

From increased unemployment and mental health issues to adult children returning to live at home, “underlying tensions” in families have increased, he says, and broad structural reforms are needed to better protect vulnerable older Australians.

‘People who fall through the gaps’

As mass layoffs started during the first wave of the coronavirus pandemic in Australia, Paula’s* son Mark* lost his job. After a violent incident at home, his partner took out an apprehended violence order against him. Having nowhere else to go, he moved back in with Paula.

His arrival marked the start of a period of abuse that left Paula scared and depressed. Mark wasn’t paying board and Paula soon found she was “walking on eggshells” around him, afraid of a violent outburst. When she asked him to leave, he refused.

It is a familiar scenario for Melanie Joosten, policy officer at Seniors Rights Victoria. “People who aren’t receiving mental health services, who can’t get housing, who are unemployed, who are under financial stress, often go to their parents for help,” she says. “That’s where situations can become abusive.”

Too often “ageing parents [are] seen as the safety net for people who fall through the gaps in other services”.

Research suggests there were heightened levels of depression and anxiety among Australians during the pandemic and the mental health system has been overstretched and under-resourced.

Concerns about increased risk factors for elder abuse are echoed by seniors’ rights organisations across the country.

In NSW, the ageing and disability commission received a 25% increase in calls to its helpline in 2020, the majority of which were related to alleged elder abuse. The number of calls to the NSW seniors’ rights service rose by 75% spike in 2020 compared with the previous year.

Tasmania reported a similar story, with calls to the elder abuse helpline increasing 67% in 2019-20 compared with the previous year.

In many states, the closure of libraries and community centres, and cancellation of face-to-face services, led to increased isolation for older people, making support harder to reach, Fitzgerald says.

For hairdresser Zowie Evans, Melbourne’s three-month lockdown meant she was unable to pick up on the subtle cues she sometimes notices from clients when something is wrong.

She is one of dozens of hairdressers trained by Eastern Domestic Violence Service to look for signs of abuse, and she says during normal times she has conversations with clients about family and domestic violence “two or three times a week”.

“I just ask ‘Are you OK?’ and it will spur a conversation.” But abuse thrives in isolation, she says. “Limits on in-person contact limit opportunities for ongoing abuse to be detected.”

Around the country, increased isolation has pushed support services to redesign their systems to reach people stuck at home who may be at risk of elder abuse.

In the Northern Territory, Territory Families, Housing and Communities increased promotion of its elder abuse hotline and reported more than double the number of calls in the second half of 2020 compared with the entire 2019-20 financial year.

South Australia’s Aged Rights Advocacy Service, Western Australia’s Advocare and Caxton Legal Service, a specialist seniors’ legal service in Queensland, all reported no increase in requests for help with elder abuse cases in 2020, but say they are bracing for increased demand in 2021.

Shelley Taylor-Smith wants her brother and sister-in-law to be remembered for who they were.

“They were so proud of their family, their castle, their home,” she says.

“They counted their blessings every day.”

*names have been changed