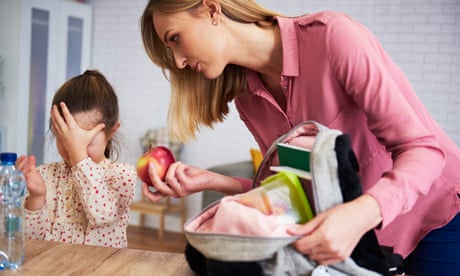 I hate people who complain about schools. I spend all week reading blogs by anonymous headteachers talking about the constant blast of whining, half of it that they’re not doing enough about Covid, the other half that they’re doing too much, and I think: who are these people, whose parental solipsism is so all-obliterating that they can’t take one second to recognise the phenomenal work these professionals do in getting our children out of our houses and keeping them in a totally separate building, often more than a mile away, for the entire day?

But a tiny bit of my busy, home-alone, Aah, Blissto schedule I reserve for just pointing out, in the most neutral possible terms, that school dinners have gone off a cliff. The kids used to come home asking why I couldn’t cook gammon and why our sausages were the wrong shape, and now they stagger in like poorly prepared explorers, starving, with multiple disciplinary actions against them, having used their sole-option pizza for the only thing it was good for, a food fight.

So we’re in the world of the packed lunch, which is a ball-ache but also unearths a lot of childhood trauma. My mum had no understanding of the concept “portable”. She thought anything was a sandwich so long as it was between two bits of bread. She once made me one of ratatouille, which turned into a kind of artisanal soup in my bag, and I bet you’re thinking that sounds quite tasty, bloody Guardian reader, and perhaps it would have been if I hadn’t had to lick it off my pencil case. My best friend’s mum once sent her in with an egg that she had forgotten to boil. We thought the two progenitors may have been involved in some pranking competition.

And here I am, same boat, 35 years later, trying to sell peas as a break-time snack. Throwing in the towel with some Dunkers. Wondering if meatballs really work in a sandwich or if it’s just some cockeyed myth from Friends, like durable intimacy between a neurotic and a narcissist.

I still think schools are the greatest invention civilisation has ever devised. But I didn’t sign up for this.

Hafta Ichi
Source: The Guardian
Keyword: I make lousy packed lunches – but they’re not as bad as Mum’s ratatouille sandwich | Parents and parenting