It’s important to note that although there are safes that offer a greater degree of fire protection, they aren’t designed specifically for documents as our picks are, and they have other disadvantages. For starters, they cost at least three times as much as our top pick (and often several times more), and they weigh so much (at least 100 pounds) that they’re difficult to move once in place. Plus, according to a fire expert we spoke to, their two-hour-plus protection ratings offer diminishing returns since most house fires are out within about an hour. 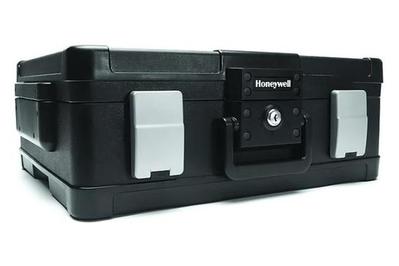 The 1114 is certified to withstand high-temperature fires for twice as long as the competition, but it weighs 42 pounds and has the footprint of a mini fridge.

The Honeywell 1114 Lightweight Fire and Waterproof Chest is independently verified by the safety organization Intertek to keep personal items safe during a fire for up to an hour—twice as long as the competition—in conditions as hot as 1,700 °F. A house fire can peak at about 2,000 °F, but this kind of heat occurs at the highest points in your home, namely the attic or at least the ceiling. It’ll be cooler down near the floor, where you keep your safe. Honeywell also says the safe will keep spray and flood water out for 100 hours. It’s large enough to hold both letter- and legal-size sheets of paper without your having to fold them. The additional protection makes the 1114 noticeably larger and heavier than other safes of similar capacities—it weighs 42 pounds and takes up the same amount of floor space as a mini fridge. But we think the price and size are worth tolerating because this safe gives your stuff a greater chance of surviving a disaster.

This model is the most affordable safe of its size, and it’s rated to last as long in a fire as anything else in its price range.

Larry McKenna, a fire protection engineer at the US Fire Administration, told us you should “get the best [safe] you can afford.” The Union Safe Company Waterproof And Fire Rated Document Safe, sold exclusively at Harbor Freight, is the best option if you can’t spend $100 on a safe or if you have limited floor space. It’s large enough to hold 8.5-by-11-inch sheets of paper without the edges curling, and it’s rated to withstand a 1,550 °F fire for 30 minutes. That’s half the endurance and a significant reduction in temperature protection compared with our top pick, so choosing this safe means you’re at greater risk of losing the contents if disaster strikes. But every fire is different, and this safe is certainly better than no safe at all. On the plus side, it has a much smaller footprint than the Honeywell and weighs only 28 pounds, so it’s easier to move if necessary. Just be careful with the keys: Unlike every other brand whose safes we tested, Union Safe explicitly says it can’t replace lost keys. 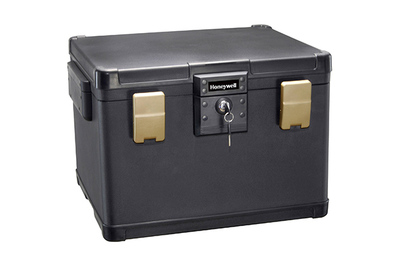 Large enough to hold hanging folders and tough enough to last up to an hour in a fire, at 80 pounds the 1108 weighs twice as much as the Honeywell 1114.

The Honeywell 1108 Fire/Water Large File Chest is a larger version of our top-pick safe, with the same one-hour fireproof rating. This 84-pound behemoth is designed to hold both letter- and legal-size hanging file folders, which is convenient if you have a lot of documents or simply want to keep your things organized. But it is a huge hassle to move. 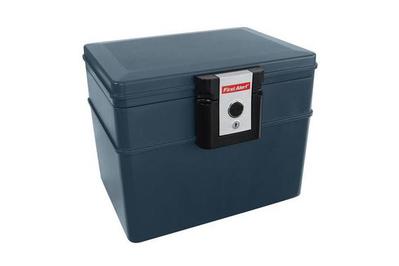 The 2037F is large enough to hold file folders and documents, but it has only a 30-minute burn rating. We recommend it only if you’re looking to save a little money or don’t have the space for a giant safe.

The First Alert 2037F Water and Fire Protector File Chest is the most affordable model designed to hold letter-size hanging file folders. It has a 30-minute fireproof rating, and over years of testing this category, we’ve been impressed with First Alert’s safes due to their reliably solid build quality and affordable prices for the level of protection they offer. Unfortunately, many of them have been discontinued, so be sure to grab the 2037F if it interests you.