Join Hafta-Ichi to Research the article “The Best Flashlight
” 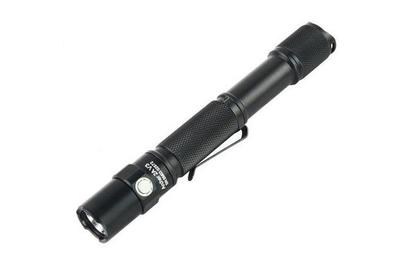 The ThruNite Archer 2A V3 has a wide range of brightness settings, an easy and versatile two-button interface, and an overall satisfying design.

The ThruNite Archer 2A V3 has the widest range of brightness settings of any AA-battery-powered light we tested, including a very dim mode that allowed us to read a map (without destroying our night vision) and a bright setting that illuminated trees 500 feet away. Like many of the best flashlights, this light has a two-button interface that lets you easily toggle through the brightness levels one-handed. The blinding strobe mode is useful in an emergency—but the Archer 2A V3’s design makes it easy to avoid activating the strobe during regular use, an advantage over most competitors. The Archer 2A V3 (available in cool white or neutral white) also boasts a number of other features found on more-expensive lights: It doesn’t roll on a flat surface, it stands upright on its rear end, it can survive a 1-meter drop or full immersion in water—try that, smartphones—and it has a memory function as well as a momentary-on feature that turns the light on and off with a half-press of the rear button. Its two-AA-powered beam pattern produces such good overall visibility that, even after trying all the other lights, we reached for this flashlight first when we headed into the woods. 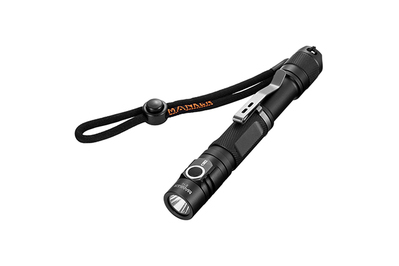 The Manker E12 has almost all the same features as the ThruNite Archer 2A V3, but the low setting isn’t as low, and its price is usually slightly higher than our pick’s.

If the ThruNite Archer 2A V3 is not available, we also like the Manker E12. This light is very similar to the Archer 2A V3, down to the two-button interface and the four brightness levels. It also shares the nice wide-angle beam, the momentary-on function, the memory feature, the anti-roll body design, and the full waterproof rating. The only significant difference is that the E12’s lowest setting is brighter than the Archer 2A V3’s, and we really preferred our pick’s ability to go very dim. Plus, the Manker usually costs a few dollars more than our pick. 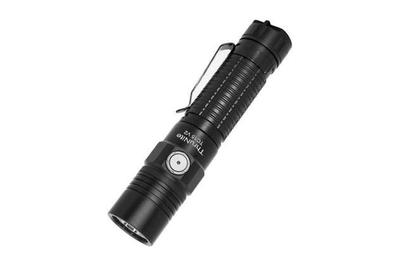 The USB-rechargeable TC15 is brighter and has a longer battery life than our recommended AA models, but charging takes time and can’t happen during a power outage.

The downsides of the TC15 are universal across rechargeable flashlights. First, once the battery is drained, it takes time to fully charge again (in this case roughly three hours). So bringing a rechargeable flashlight back to life isn’t as quick as simply swapping out AA batteries. Also, if the battery drains during a power outage, you can’t use the light anymore unless you have an independent power source to recharge (or additional 18650 batteries). Rechargeable lights are great and offer a lot of convenience, but for the above reasons, we still prefer AA-battery-powered flashlights for our main recommendation. 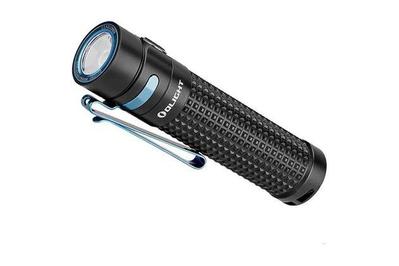 Easy to recharge, not as bright

The rechargeable S2R Baton II is smaller, less powerful, and typically more expensive than the TC15, but the unique charging system is about as hassle-free as it gets.

In performance, the rechargeable Olight S2R Baton II lands in the middle between ThruNite’s TC15 and Archer 2A V3. It’s smaller than both, making it a nice everyday-carry option, but what really stands out about it is the way it charges. As with the TC15, charging goes directly into the body of the light—but the S2R Baton II has a magnetic USB charging attachment that clicks against the tail of the light, so there’s no need to fuss with plugging anything in. The design is very convenient, and as a result we found that we kept this light charged more consistently than the others. Like the TC15 and all other rechargeables, the S2R Baton II comes with drawbacks in the time spent charging and the difficulty of recharging during a power outage, unless you have additional 18650 batteries ready to go.