But if you already own a game console and a controller you like, whether it’s an old Xbox One gamepad or a Nintendo Switch Pro Controller, you don’t need to spend more money on a controller specifically for your PC. Any controller that has two analog sticks, two shoulder buttons, and two trigger buttons, and is capable of connecting to your computer via USB, is usable with PC games. Some require more configuration than others, which we’ll cover below. 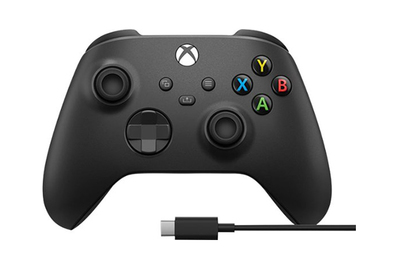 Microsoft’s controller is comfortable to hold, and it benefits from built-in Windows support—simply plug it in, and it works with just about any game that supports a controller. But it requires AA batteries or an add-on rechargeable battery pack if you want to play wirelessly.

Microsoft’s Xbox Wireless Controller for the Series X|S consoles is nearly identical to the older Xbox One controller—it adds a Share button for clips and screenshots, uses a USB-C port, and has a redesigned eight-way directional pad, but otherwise the two are hard to tell apart. It’s a proven design that works well, and the vast majority of PC games offer controls and button layouts that assume you’re using an Xbox controller (or one with an Xbox-style button layout). Audio quality from the headset jack is good, for those occasions when you don’t want to connect your headphones directly to your computer. The biggest downside is that you need a pair of AA batteries or a rechargeable battery pack if you want to play wirelessly (most other controllers include a built-in rechargeable battery at this point). 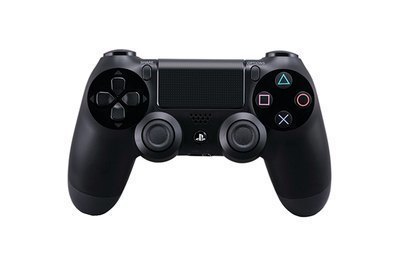 Sony’s PlayStation 4 controller is a more comfortable choice if you have smaller hands, and it has a built-in rechargeable battery and nicer-feeling analog sticks. But it might require additional setup for some games, and many games default to Xbox-style button labels.

The Sony DualShock 4 Wireless Controller is somewhat smaller than the Xbox controller, making it a more comfortable choice for those with smaller hands. It also has more comfortable control sticks than the Xbox controller, as well as a left-positioned directional pad that’s more comfortable for playing 2D games. It has some nice extra features that the Xbox controller lacks, such as an internal rechargeable battery and a touchpad that can simulate a mouse cursor. But making it work with non-Steam Windows or macOS games takes some extra effort, and headsets plugged into its audio jack don’t work properly with computers unless you buy Sony’s USB wireless adapter. Many games also assume an Xbox button layout, and as a result it can be confusing when the in-game button labels don’t match the buttons on your controller. We like the DualShock 4 better for PC gaming than the PlayStation 5’s DualSense controller, which has the same shortcomings but is physically larger and more expensive. 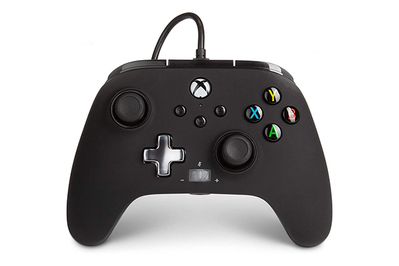 This officially licensed clone feels a bit cheaper than, but surprisingly similar to, Microsoft’s Xbox gamepad, and it usually costs around half the price.

If you want to spend less and you don’t mind a wire, the PowerA Enhanced Wired Controller for Xbox gives you most of the features of Microsoft’s newer controller for around half the price. Its analog sticks and buttons are comfortable enough for hours-long gaming sessions, and since it’s compatible with the Xbox console lineup, it takes advantage of the great Xbox controller support built into both Windows and Steam. Compared with other budget controllers, the PowerA controller feels better in the hand, and the audio quality from its headset jack is better. It also has a convenient volume and mute switch and additional configurable buttons on the handles. 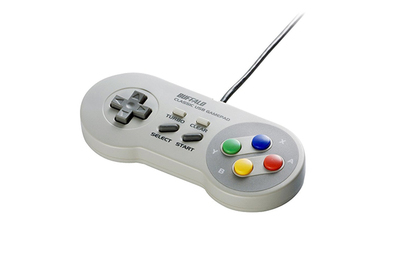 If you like playing old games and want a more authentic experience, this is the best of the many SNES-style controller replicas.

If you play retro (or retro-throwback) games that don’t need all the extra buttons, sticks, and triggers of modern controllers, a simpler gamepad can provide a better and more authentic experience. The Buffalo Classic USB Gamepad is not as faithful a replica as the controllers that come with the Super NES Classic Edition, but it is the best of all the SNES-clone controllers out there. Its buttons are comfortable, responsive, and clicky, and it has a Turbo feature to help with repetitive button mashing. But you need to manually configure most games and emulators to work with it (you’ll find no built-in Windows, macOS, or Steam integration to speak of), and it’s a bad fit for most modern games, which require thumbsticks and more buttons than the Buffalo Classic USB Gamepad has.